Leon Magnus was one of my earliest “dream costumes” – he’s one of my favourite Tales characters ever and I adore his design. Who doesn’t want a fancy jacket and a swooshy pink cape?

I have made this costume twice – originally in 2013 to meet Hideo Baba at London MCM, and then again in 2016 as a fully updated version. As a character, Leon means a lot to me so I’m very critical of this costume; it’s still a work in progress now and I plan to continue updating him with props and accessories until I’m happier with it. 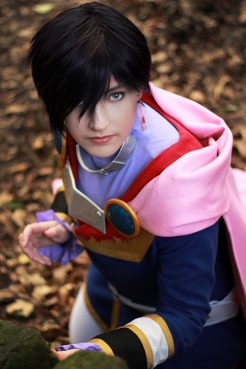 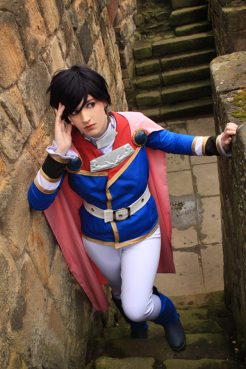 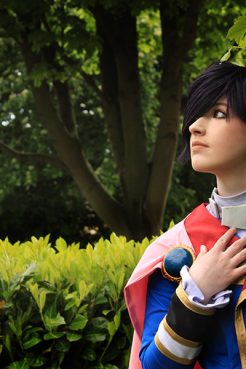 Construction Notes:
Because I made this costume twice, a lot of the pieces I made in 2013 were reused as patterns for my 2016 version.

I didn’t like my original fabric choices and decided Leon deserved better, so I chose more luxurious materials when remaking his costume to suit his personality. The jacket is made from an offcut of blue luxury cashmere wool with red wool and cotton for the collar; much nicer than the original version I made from quilter’s cotton! I love the contrast in textures on this costume, especially the cape against the jacket.

I still have a lot of pieces to update on this costume. Some of the armoured pieces need remaking, and I would also like to make his Swordian Chaltier.

I have used two wigs for Leon; the original (used in most pictures) was a Sebastian character wig in Black/Purple Blend from AyanamiSatoru. The updated wig is a slightly longer Blue Steele in Dark Purple from Arda Wigs, trimmed and backcombed for extra volume. Both wigs have a purple tone to them – in different pieces of official art his hair is shaded with blue, purple or grey. I liked the purple tone best in real life, against the colours of his costume and against my skin tone.

The earring was modified from a pair of drop earrings bought from Claire’s Accessories, attached to a clip on ear screw.

The turtleneck shirt is bought. It has a rolled neck which makes it comfortable to wear and also helps keep the collar in place.

The collar is made from black worbla, primed with layers of mod podge, sanded smooth and spray painted silver. All of the panel details and studs are made with black worbla and heated into place. It closes at the back of the neck with a hook and bar fastening – the black worbla remains flexible enough for it to bend without cracking.

The gems on the front of the jacket are made from worbla and resin. The gems were cast in a large oval mould using Gedeo’s Crystal Resin with Vitrail Ink to colour each gem. The resin was mixed with Barry M’s Dazzle Dust for a light shimmer and coated with gloss for a shiny finish. The base of each gem is made from worbla, primed with wood glue and sanded smooth. Each gem fastens to the front of the jacket and the cape with large snap fasteners.

The plate on the front of the jacket is made from worbla with card embossing, primed with wood glue and sanded smooth. It attaches underneath the gems with hook and bar fastenings. I would like to remake this piece to make it smoother.

The jacket is made from blue and red cashmere wool with red cotton, white crepe, black drill and gold dupioni trims. It is lined with blue anti-static polyester lining. It is made from an original pattern with angled “princess seams” at the front and back to match the design. The original jacket made in 2013 was too short on my torso, so I based the updated version on my original pattern for the panels but extended it to a more appropriate length. The front of the jacket is double breasted, closing with snap fasteners with bars for the belt to hook on to at the waist.

The gold patterning on the collar was made using gold dupioni and bondaweb. The pattern was cut and ironed into place, finished with matching handmade bias binding. The sleeves have cuffs made from white crepe and black drill, trimmed with the same gold bias. The purple ruffles at the edge of the cuff are made from chiffon – technically they should be attached to the shirt underneath, but it is much more comfortable to wear it this way. I plan to make some improvements to the shape of the jacket, particularly how it fits around the waist.

The cape is made from a heavy linen blend. It is made in two pieces – the cape itself is sewn to a gathered neck panel, so it sits correctly over my shoulders. It attaches to the jacket at the front and the back with snap fasteners, disguised by the neck panel and by the gems on the front of the costume.

The belt is made from white faux leather with large gold eyelets. There is no obvious closure on the belt in any of his art so it was very awkward to make it “accurate”. As a result, none of the belt fastenings are functional and it pulls on over my head to fit, securing to the jacket with hook and bar fastenings. The buckle is painted with black tips around the edges. This is another piece I would like to remake.

The trousers are bought.

The boots are covers made from the same blue cashmere wool and anti-static lining as the jacket. They are sewn to a pair of navy heeled boots and close on the inside seam with a snap fastener. There are some details missing from these I plan to add later.

Chaltier was borrowed from my friend Astral Locke at KitaCon 2017. I plan to make my own, but hers was a fantastic prop to complete the costume with. 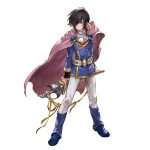 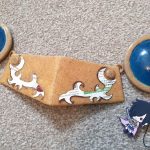 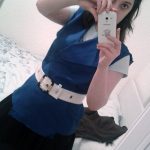 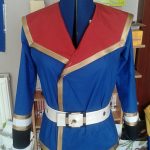 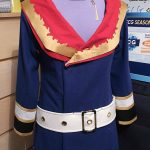 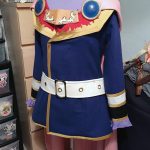 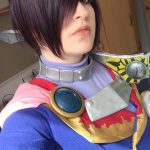